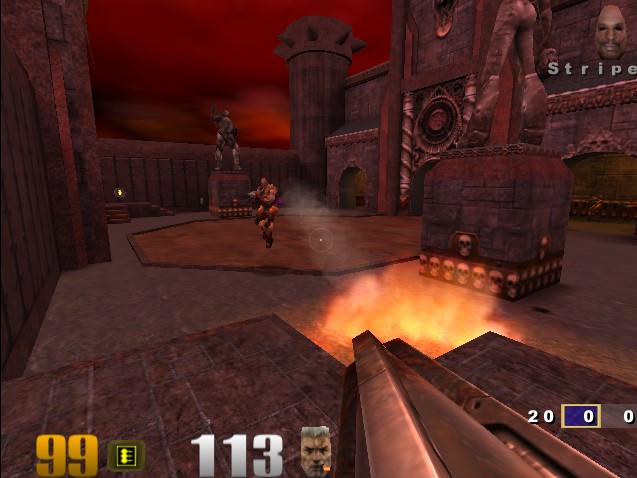 Note, the bot strength is little less in CPMA in comparison to Vanilla Q3. So, if you want play with 5+ players, select Vanilla Q3.

Take part in online competitions. The current servers have been started as Quake 3 Fortress(http://www.moddb.com/mods/q3f) and Challenge Pro Mode Arena(http://playmorepromode.org) mods.

Quake 3: Arena is a multiplayer first-person shooter developed by Id Software and published by Activision in 1999. And now the game can be played online in a browser ... (Author: Anthony Pesch, https://github.com/inolen/quakejs)

The game has single player and multiplayer. Let's take them apart.

Since the basis of games is multiplayer, we’ll start with it. In total, there are 4 types of battles:

In a tournament, the battle goes one on one. Then the winner fights with the next participant. In capturing the flags, your task will be to grab the flag of the enemy team and bring it to your own. The enemy flag will be defended, unless your flag is in place. Further command fights. Everything is elementary simple: red against blue. Whose command will pick up more frags, those and great. Well, the mode is every man for himself. It's just a mess, the name speaks for itself.

In single player mode, everything is the same as in multiplayer, but only with bots. And also there is something like a contest in which we will need to go through the levels alternately, battling bots. There are 4 maps at each level, and 7 levels in total, including the final one, in which you will be confronted by the arena champion.

The choice you will provide a lot of fighters and a lot of arenas.

Also will provide you with 9 types of weapons:

There are several types of weapons on each map , but not all. They are scattered around the map and appear in the same places. More on the map are scattered rounds, first-aid kits, Bonia. And on some maps you can find mega life, or you can raise Quake. Outwardly, it looks like a blue game icon, raising it for a while to make you stronger. The damage you inflict is increased 4 times, and a blue halo envelops you, making it easy to determine who owns a quek. Well, a lot of useful bonuses, such as stealth, flying, improved protection.

I can’t mention that the game has an awesome soundtrack written by Front Line Assembly and Sonic Mayhem. It's nice to just listen to them, but in the game it's one pleasure. As for the graphics, then generally do not care that it is all angular. In this game, there is so much drive and action that what it is is quite enough.