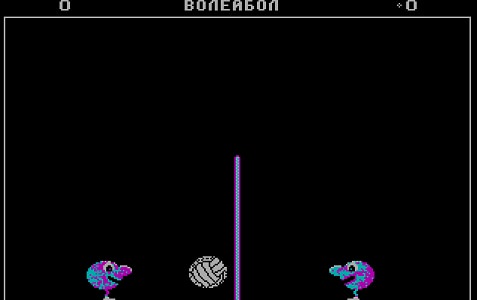 Almost nothing can be said about Arcade Volleyball except two things. The first one is by no means a volleyball simulator, but the most volleyball arcade or even, more precisely, an arcade with an “element of the likeness of volleyball”. Secondly, this thing is so wonderful that it captures much more “normal” sports games.

Its essence is this. On a black background there is a stick in the middle and two remarkable creatures on the sides. These are not people - and the one who calls them people is very mistaken. These creatures have tiny legs, no arms at all, giant heads, slightly less giant noses and incredibly moving facial expressions. These creatures play volleyball with each other through the ball: one hits the ball head up, the other, when the ball flies to its “half of the field”, tries to hit it back. If the ball touches the ground, then the one on whose plot this happened loses a point. If one of the creatures fails to knock out the ball (it immediately falls to the ground or does not fly over the stick after three attempts), then the move goes to the opponent. The game goes up to fifteen points. All.

And really - that's it. There is nothing more to describe here, except to note that the creatures themselves are drawn in the CGA palette very, very beautifully. Such games do not need large descriptions - they need to be played exactly, which all connoisseurs of this Antiquity should do as soon as possible.