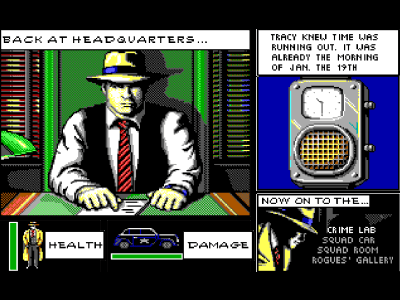 After the failure of Titus Interactive's Dick Tracy, development on various platforms still continued. In 1991, Distinctive Software, the creator of the Test Drive series, released a much more interesting variation of a 1990 film called Dick Tracy: The Crime-Solving Adventure. Of course, a company of this level did not make a crooked arcade, but something more. In addition to the PC came out on Commodore Amiga.

Gameplay is multi-genre. We start in Tracy's office, where you can go to the laboratory, chat with colleagues and see the cases that have already been solved. You can get to the crime scene only by car at a special racing stage. It is advisable not to crash into other cars. Moreover, you can encounter a car of criminal authority, which, of course, immediately arrange disassembly on the side of the road. Then follows a platformer, in which the goal is to ask people about what happened and to collect evidence.

As you can see, in theory, everything is fine, but the implementation still pumped up. In some cases, the complexity increases significantly (especially in the sewage system, where Dick may fall down due to rats entangled under his feet). Management is not the most obedient. Sometimes the game interface starts to flicker or distort, which is to blame for the developers.

If the original Dick Tracy supported the VGA and Sound Blaster video adapter, then this game remained on EGA and PC Speaker. Of course, pale yellow faces look weird, but otherwise the graphic design looks above average. Despite the support of even then annoyed "tweeters", the matter is not limited to sound effects. On the contrary, almost every single element of the gameplay is accompanied by music, which, although it sounds at the level of "Whether in the garden, in the garden", is still present.

Dick Tracy: The Crime-Solving Adventure can be advised to lovers of exciting adventure games, for which complexity is far from an important thing in games. The rest is also recommended, but not for short-term relaxation, but for thorough passing.