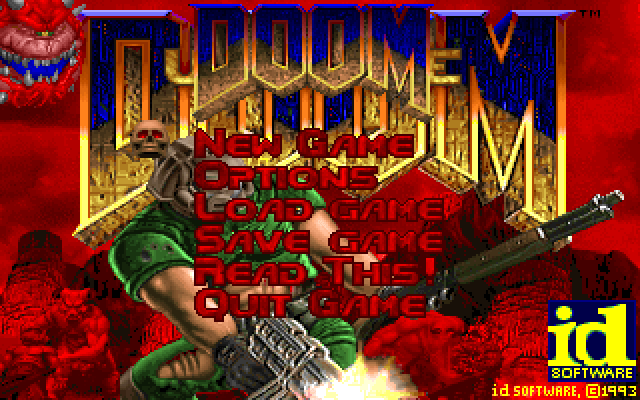 Doom is the iconic game of John Carmack. And here you can play Doom 1 absolutely for free.

Note: a lot of pepople write that the player does not move, only turns. In fact, the control is built as in counter-strike: a - strafe left, d - strafe right, w - forward, s - backward, shift - acceleration, open the door - space, right mouse button. Left to right - with the mouse, or <- -> on the keyboard, shoot - ctrl or the left mouse button.

First of all, have you ever seen at least in one game a map of hell on a scale of 1 to a hundred ?? And besides, the main character of the game is so hardened that it can walk on lava and acid waste with bare feet, relieve pressing, enter berserk mode and tear enemies into pieces with bare hands and at least epileptic seizures do not happen to him??

The Doom arsenal, namely the pistol, shotgun, minigun, garnet, is still relevant today. Epic chainsaw and at least epic double-barreled and BFG9000. Also, oddly enough, Doom is not a stupid, thoughtless joke, even a very thoughtless one. For its passage you will need, remember, almost all levels are fucking levers, business cards that reveal something somewhere. If you look at the map, then you can finally go crazy, especially at high levels, where at least it is very difficult to understand something, not to mention the fact that you need to remember the location of all the traps, from which a bunch of enemies jump out on you, the location of first-aid kits, armor, ammunition. Really have to look for secrets, because they can seriously simplify some points. On the last levels, a general chaos is created: 20 teleports, location-labyrinth.

There is one BUT. Doom is simply brilliant game design. Everything is so perfectly located in its place and happens in its time that it is impossible not to admire. And of course this is a very dynamic and fun shooter with mega epic enemies and bosses. That only costs one kakodemon and cyber spider. In general, the developers were very original. In 1993, create a game where the dude brings down demons with a shotgun. These guys gave birth to a lot of interesting things, for example rocket-jump. Namely, a jump using a shock wave with a shotgun.