The boyfriend had to go through a lot to win the heart of a charming girl. At first, he tried to please the beauty, and when he succeeded, a new problem immediately arose. Girlfriend's father was against their relationship and started a real war against the guy. At first, he himself fought with Boyfriend in a musical battle, but after losing, he set other fighting musicians against him. Among them were both monsters and assassins. But the boy managed to crush everyone and, with his talent, win the opportunity to enter into a relationship with his beloved.

And when everything seemed to be working out, a new problem arose. A mad Boyfriend fan named Sky has appeared on the horizon, who wants to get the boy's favor. The girl was transported from a parallel reality, where they were an ideal couple. But the guy is not ready to just step back from his relationship and marry Skye. He refuses the girl, and here the fun begins!

In Friday Night Funkin: Sky, you must help a boy in love fight his own fan and defeat her. Otherwise, the girl who is crazy about love threatens to harm Girlfriend by assuming the guise of her dark side named Manifesto. You have to defeat Skye, Manifesto and other characters in order to maintain a relationship with your beloved Girlfriend. Enjoy your game and good luck! 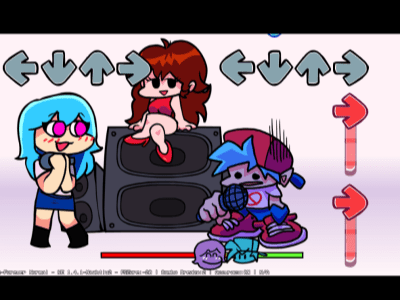