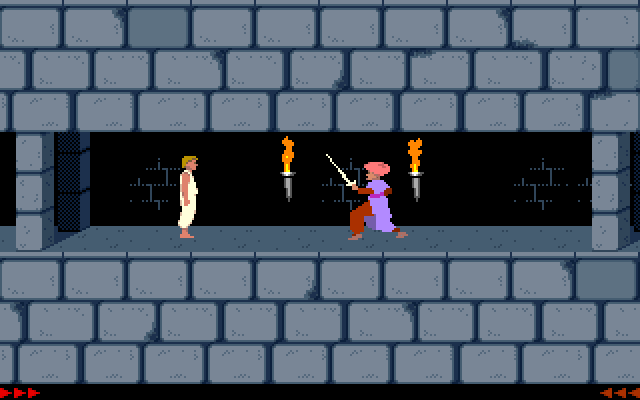 Here you can play Dos game Prince of Persia in browser online.

In 1989, Jordan Mekner made a game that influenced the entire global gaming industry. It was Prince of Persia for DOS. Prince of Persia was published for the Apple 2 PC by the Broderbound Software, later ported to many other platforms, including Apple Macintosh, Amigo, GameBoy, MS-DOS, SNES, and others.

The game is a platformer that combines a running in the dungeons and sword fighting. As you can see the graphics are painfully good for 1989. And indeed, at that time she made a breakthrough because it used rotoscoping technology.

According to the scenario of the game while the sultan is at war, the Grand Vizier Jafar is trying to seize the throne by abducting the princess. The antagonist confronts the princess with the choice of becoming his wife or dying and gives her 60 minutes to think about. And the hero of the game is the true love of the princess. He must escape from prison and save her before this hour expires.

If you look from the side, it may seem that the plot is very weak. But what else is needed for the platformer? Nobody complains about Mario, although it’s still easier there.

It is interesting in the game that you can die an unlimited amount of times and we will just always appear at the beginning of the round, but the timer counter will move further. So dying at first is not so scary, scary to lose the extra minutes. However, there is another feature. If you have a PC based on an Intel 80286 processor, it takes more than an hour, about 80 minutes.

Our hero is not such a bad tracer and quite well under deft hands can survive and get through different traps, such as falling floor, spikes, guards. From the bonuses of the game Prince of Persia for Dos can be noted potions. Potion with red steam - healing, with blue steam - poison, and with green steam - something addictive :)

In addition, a lot of comics, books, and even feature films were written under the influence of the game Prince of Persia DOS.