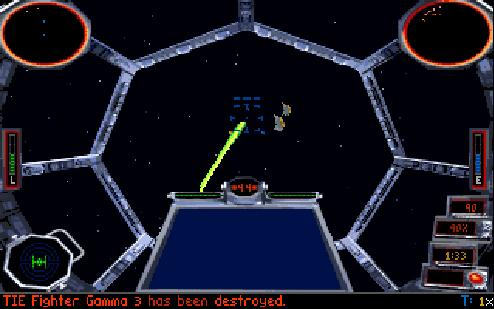 Star Wars: TIE Fighter is a great cosmic warlike space. Unlike its predecessor X-Wing, here we play for the Empire. Among the ships available for flying there are both familiar from films (TIE Fighter, TIE-Interceptor, and TIE-Bomber), and invented by the developers.

The game has three main modes: a primitive simulator, historical missions (also a simulator, but as if it is real) and, most importantly, campaign missions. As you progress, new campaigns and an Empire Fighter will open. Which one Find out when you get there. I can only say that it is in SW: Rebellion and also in SW: Empire at War: Forces of Corruption.

The graphics, of course, are not great, but compared to X-Wing, the engine stepped forward. The ships are now more detailed, and the animated screensavers are simply awesome. Even in our time, TIE Fighter is easy to play and does not cause rejection.

About the plot. The plot is divided into six related campaigns. Campaigns have nothing to do with kinozagoy, but this is not a disadvantage, the plots are very interesting and exciting. You will need to help the imperial fleet to build a new space base, separate the two warring nations and even accompany and protect the Emperor's shuttle! In addition to him, there is a Grand Admiral of Thrawn and even Darth Vader in the game who is familiar with the books and SW: Rebellion (you can fly in one link with him, but don't try to order him!). The main fighters do not have shields and hyper engines, but this does not make the game difficult. Opponents are often smeared even on Hard. The game is quite possible to go with the mouse, although it simply screams "give me a joystick!".

Even after going through the whole game, you don’t want to delete it immediately thanks to a wonderful chip - medals and titles given during missions (not on the simulator, of course). The case with the medals did not go anywhere, but it was not without innovations. Namely - a community of persons close to the Emperor. Glavgeroy can also become a member of the club. For the performance of additional tasks in missions, a special sign symbolizing the status of approximation is put on his arm by lightning.

At first it will be difficult for beginners, since this is still a simulator, not an arcade game. Almost all keys on the keyboard are involved, which at first is a bit scary. But over time you start to get used to it and press the necessary buttons on the machine. For this there is a helping key "K", press it - a screen appears with a description of others. The distribution of energy of shields, lasers, attracting beam - everything needs to be adjusted in time, because it is the only way to survive in this intergalactic war.