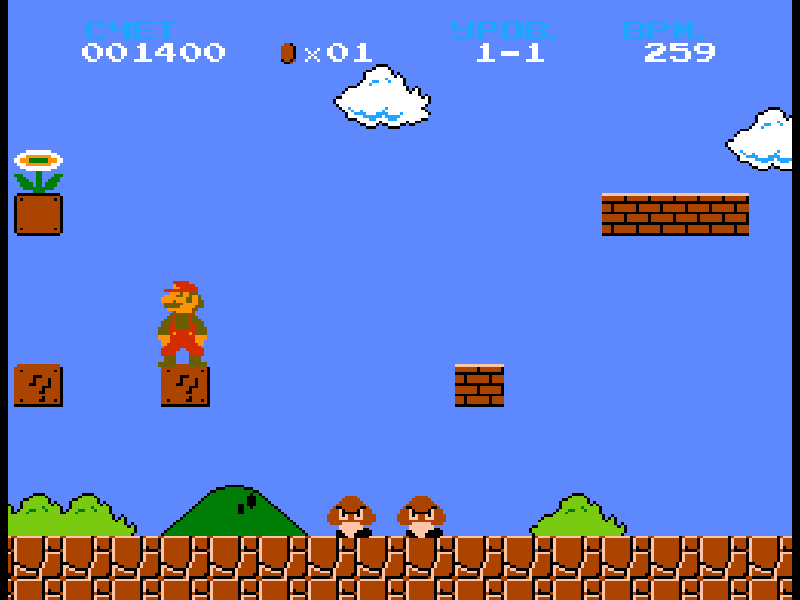 Super Mario Bros is the game about the plumber with mustache  who wants to free the princess. This is the oldest game on 8 bit consoles. A series of games is available from 1983 to today. And the character itself has existed since 1981 and first appeared in Donkey Kong. There is no player who had a 8 bit console and has not played Mario. This game was bundled with any purchased console. But even if it wasn't, it always participated in different collections of games: 7 in 1, 31 in 1, 100 in one, it doesn't matter, but it was always in assemblies.

The most interesting thing is that people still play it. But not necessarily on 8 bit ports. Already worthy remakes are on various operating systems such as Android and IOS. And this people are not only the old school players of that period, but already the younger generation.

Brief prehistory of Super Mario Bros: Evil dragon sharpened the princess in the castle and your mission - of course to save her. Who else but you? We run to rescue our princess, who was kidnapped by some dragon. We collect coins, mushrooms. The game has 8 worlds, each world has 4 levels.

We have to play by this plumber-dwarf. Mushroom gives us an amazing opportunity. The mustache gets cooler, the nose gets bigger. Now we can crush bricks with our heads and most likely we have the power of the Earth. We will fall into strange creatures, such as the Humbus on the first level. Then there are duck-turtles and duck-flying turtles, hedgehogs, clouds, which throw hedgehogs, ninja turtles, which throw hammers. Taking a star, we can now knock out all just faced with them. And if you take a flower, then we have the opportunity to shoot fireballs.

Playing Super Mario Bros is actually harder than it seems, Mario constantly skidded, hard to control. The game can be played together, but only one by one.