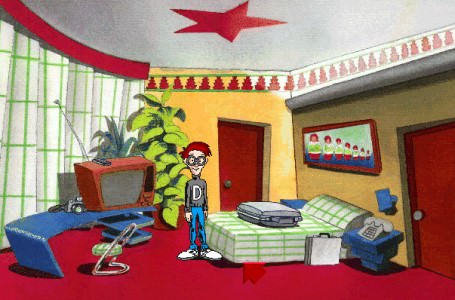 Russia embraced by liberalization and westernization. A conservative villain who dreams of reviving the communist system. Hidden threat hanging over the whole continent. All this is The Big Red Adventure.

It all began in a rather ordinary way: Dag Nats, the main character of the game, decided to kidnap another value, the artifact crown of Tsar Ivan the Terrible. The skill of an internationally robber robber helped Dagu to reach the cherished crown, but at the most crucial moment the situation changed dramatically, turning the famous criminal into the only hope of millions of people. However, Doug and the salvation of the whole continent are on the shoulder, all the more so that strong man Dino and beautiful Donna are always ready to help - the elusive trio is back in business!

One of the main advantages of the game is flawless styling under post-perestroika times. This concerns not only the visual design (although it is certainly present), but also music, and dialogues, and many details that are not visible at first glance. To create the right atmosphere, the authors even made a special font, replacing a good half of the letters with Russian counterparts (!).

Needless to say that the chosen setting has a different kind of parodies and humor? Dynabyte filled the game with all sorts of jokes and humor: there is also a caustic satire next to lush pathos, and classic cheap popular jokes about bears with balalaikas, and the magazine "Consolefobia" to boot. The humorous potential inherent in the game in the eyes of a Russian man who, at the age of reason, found perestroika, is fully revealed.

Well, what about the game with the technical characteristics?

Bright cartoon graphics leaves a very pleasant impression: the locations are clear and bright (the red color and its shades, of course, dominate), the characters are well animated.

The musical arrangement also did not disappoint: light motifs caress the ear (by the way, most of them are recognizable from several notes, as taken from well-known musical compositions). With the sound of the game, everything is also in order, although its configuration should be approached with care: due to incorrect settings, various bugs can be observed (the game can even hang tight).

However, problems with sound can be at least solved, but with the existing management, you will have to put up with the whole game. To accomplish the simplest for the quest manipulations with the inventory you will have to memorize several unobvious mouse combinations. And the more items you have in your inventory, the more often you will have to practice handling the mouse. Why did Dynabyte give up convenient classical control? ..

Summing up, I would like to say that, like last time, Dynabyte prepared for the players a bright, intriguing and adventurous game. The Big Red Adventure is a really interesting quest, made in an unusual (but very close to us) Russian style of the nineties of the last century. If unsuccessful management and possible in-game bugs do not bother you - be sure to check out this game: you are guaranteed a good mood!