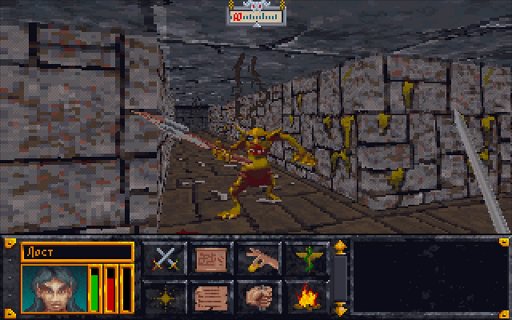 The Elder Scrolls ... Almost certainly you are at least indirectly familiar with this series - regardless of whether you love it or hate it fiercely. Virtually every modern gamer, at least a little interested in the role-playing industry, is familiar with TES IV - Oblivion. But it is unlikely that someone from the beginning “role players” who passed through the wastelands of Oblivion wondered at least for a minute why the favorite game has the number 4 in the title and why this series began ...

In the now distant 94, Arena was born. The game, conceived as an Action about gladiatorial battles, at some point grew into the most ambitious fantasy RPG of that time. Only the name and a couple of references to information from the early dizdokov ("Go Blades!", For example) in subsequent games remained from the original concept. But now all this is unimportant - it is important that we got "at the exit", after all the vicissitudes of the development.

And we got more than just an ambiguous game. On the one hand, we saw a huge world, one glance at a map of which caused respect for it, more than four hundred different cities and villages, countless NPCs, an incredible variety of subjects, a somewhat unusual, but interesting and well-developed role system ... On the other hand , on closer inspection, almost all of this turned out to be stamping. The world was made up of pieces, as if descended from the conveyor, and after a few hours of play, it pored to the extreme, the cities turned out to be monotonous, and their inhabitants seemed cloned, and the whole variety of objects was achieved by variations on the subject of enchantment and the material from which the item was made. What then could be attractive in this game? .. It is here that you should pay special attention to the role-playing system.

She is gorgeous. Yes, do not throw stones at me D & D fans - this is a system of another flight. Of course, the 18 classes available to the player, in large, are also just variations of the three archetypes — warrior, thief, and magician — with a difference in the initial values ​​of characteristics and skills. But it does not matter - no matter what class you choose, the character will be exactly as you want. And perhaps this is due to the system of improving skills, in my opinion, the most relevant to reality, - "what you use is swinging." The simplest example: to raise the skill of fighting with swords, you have to .... That's right, fight with swords. Logical, isn't it? But besides skills there are also characteristics - strength, endurance, speed, agility, intelligence, will power (wisdom), luck, and they are all closely intertwined with skills. Having received a similar system in your hands, you actually gradually “sculpt” your character from the clay of experience, giving it the desired shape. Magician, waving a two-handed ax, is your dream? Welcome.

Classes, skills, characteristics ... The picture complements the list of races - you can become a green-skinned argonian or an arrogant dunmer (dark elf). But there are Bretons, Redguards, Nords, Bosmer (Wood Elves), Altmer (High Elves) and even cat-like Khajiit. Almost ten years later, the orcs will add to this list - but here they are only monsters, and nothing more.

Speaking of monsters. Each of the species represented in the rather extensive bestiary of the game has its own unique features. Someone is immune to magic, someone can be hacked only with silver or ebony weapons ... Often the knowledge of the weaknesses and strengths of the enemy allows you to end the battle, not allowing it to begin. And fighting in the Arena has a lot - aggressive-minded creatures will be found in huge dungeons scattered around the world, and on the surface of the earth, and even in water. Here we can not fail to mention another drawback of the game - all the dungeons in the game, except for the plot ones, are randomly generated. It would seem that this can eliminate a certain amount of uniformity of everything that is happening, but ... The effect is achieved absolutely opposite.

And since we are talking about plot dungeons, it's time to move on to what makes them so. The plot, taken by the superficial glance, may seem simple and simple, however ...

In the year 389 of the third era, Yagar Tarn, an adviser to Emperor Uriel Septim VII, a war mage and a distant descendant of the first ruling Kimmer dynasty, betrays his lord and sends him to another dimension (together with the leader of the imperial guard, Talin), using the power of a great artifact - Staff of Chaos . The only witness to the betrayal — Ria Silman, Tarna’s student — was killed on the spot. The prudent Tarn also deprived the staff of its staff and smashed the artifact into eight parts, hiding them all over Tamriel. Having accepted the appearance of the emperor with the help of magic, he ruled Tamriel for ten years, gradually nullifying all the achievements of the true ruler. Riots, petty rebellions and even civil wars erupt throughout the Empire. Few people pay attention to changes in the behavior and policies of the emperor, because much more pressing problems occupy the minds of the people of Tamriel. It would seem that nothing could save the Empire from anarchy ... If it were not for magic, Riya managed to cast a spell before her death, which allowed her to return to the world of the living as an incorporeal spirit. She is in a dream to the son of Talin, thrown into a dungeon deep under the Imperial City, and tells him about the essence of everything that is happening ... Opening the cell door and releasing the prisoner to freedom, Riya gives the Empire a chance ... And you are able to realize this chance to the fullest. Assembling the Staff of Chaos and returning the throne to the rightful owner is not so easy - a lot of trials are waiting for you on the road to victory, and their storyline will surely not leave you indifferent. Something that, and the literary component of the series was at its best from the very beginning: dialogs, notes, books, plot inserts - all this is just pleasant and interesting to read, and I, for example, am ready to give a lot for it.

So what is the result? I haven’t described many of the possibilities of the game that make it much more interesting (an amazing number of factions you can enter, alchemy and so on ... up to the possibility of swimming in some dungeons on the boat ...), and I did it consciously. Those who have already decided to try their luck in the Arena will see and explore everything themselves. As for the doubters ... If you are not scared away by the scary graphics by today's standards and some monotony of the gameplay, it is still worth downloading and trying. At least - to get acquainted with the "roots" of modern free-play RPG.