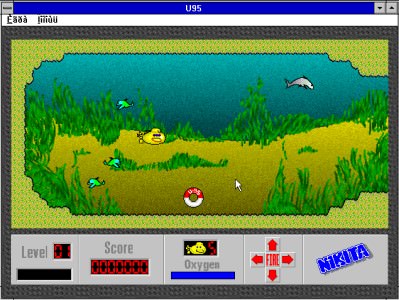 U95 is a widely known and beloved game in Russia about the adventures of a small yellow submarine in the deep sea. In the column "developer" is listed Nikita, which means that complete with fascinating gameplay comes clockwork music and beautifully drawn characters.

The game process is simple, like two pennies: controlling a submarine, it should be carried out in dozens of huge and relatively complicated levels, while avoiding collisions with numerous sea inhabitants and collecting treasures accumulated at the bottom. The main goal is precisely a set of points, so to achieve records you need to climb into the deepest crevices and look for hidden prizes in the most inaccessible places. Our submarine is well armed and shoots with energy beams that initially fly in a straight trajectory. Soon you will be able to get additional weapons - for this you just need to find somewhere hidden lifebuoys, which are responsible for improving the submarine systems. With their help, you can replenish the supply of air, so necessary at such a huge depth.

Each level consists of several screens, and there are many enemies on each screen, and if you hesitate, it will sail even more. Any collision is fatal for us, so we have to move quickly, but carefully. Levels often branch out into several paths, some of which will lead you to a dead end. But even at dead ends you can find useful prizes, or even additional attempts, which are never enough. As already mentioned, the drawing in U95 is at the highest level, so all kinds of octopuses, sharks and jellyfish do not cause anger and irritation, but only emotion and playful frustration. And in general, the game sets in a positive mood, which contributes to the bright and bright design levels.

If you have not played U95 yet, be sure to try it - it is during these games that time flies most pleasantly and unnoticed. Well, if a big part of your life once passed for U95 ... all the more, play it a little more - this game is from the category of those that most fully recall the good old days.