1v1.LOL is a third-person action game inspired by Fortnite. Here you can fight the enemy in a common area where you have the same weapons, the same ammunition and construction skills. The goal is simple: build safe structures, hold your ammunition and destroy the enemy before he destroys you.

Soldiers turned into builders in a third-person shooter and 1v1 LoL construction simulator. Warriors in brilliant armor learned to build giant fortresses for protection, but did not lose their fighting skills. Their arsenal includes 5 types of blocks. They put up walls, stairs, cones or spikes. Buildings are destroyed by a halberd, and opponents are shot from a shotgun or machine gun.

Battles take place in 3 modes: 1x1 duel, battle royale or party with friends. Additionally, in JustBuild, you practice construction without fear of dying from an enemy bullet.

The game was released in December 2019. It was developed by Lior Alterman. 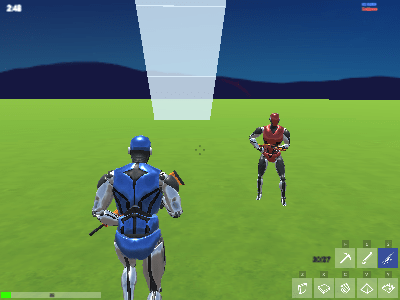