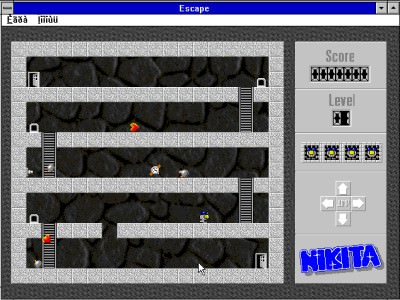 Escape is an arcade game with a side view from Nikita, one of the leading domestic developers of computer games of the 1990s.

The plot of the game is conditional and gives "a heavy Soviet legacy": a political prisoner under your control must escape from a terrible prison. The prison is divided into thirty level screens, which are platforms connected by ladders, and the exit is always at the top of the screen. On each screen there are two types of dangers: firstly, rolling bombs that need to be jumped, and secondly, small nuclei flying out of wall cannons, from which you need to try to dodge. By default, there are four "lives", but their number can be increased by collecting bonuses.

The game is made in a rather interesting graphic manner, although, of course, one does not have to wait for any special beauties. Being largely a development of the ideas of Donkey Kong, "Treasure" and many others, and being clearly oriented towards office amateurs, this unpretentious thing has nevertheless become a true classic of the domestic gaming industry.