Forge of Empires is a unique mixture of turn-based strategy and urban development simulator from German developers InnoGames. The strategy has become popular thanks to its unique gameplay and complete immersion in the game world. Made in the best traditions of such famous strategies as Civilization and Age of Empires. Users, developing their empire, go through all eras from the Stone Age to the distant future.

As a large river begins with a small brook, so our empire begins with the construction of a city. We have to go through all the eras of human history, so the path will not be easy, but very interesting - we guarantee. For development, we will need to acquire buildings, some of which will bring resources, while others will give a number of bonuses. Fans of urban simulations will be delighted in every possible way to equip the settlement. Fans of military strategies will appreciate the capabilities of the combat system. During the battle itself, you can control the army, which makes each battle unique and allows you to respond to changes on the battlefield instantly. Despite the fact that military companies practically do not calm down, since everyone strives to grab a tidbit, you do not have to go headlong into this development path. Develop technology, trade with neighbors, help them and ... meet a new era! 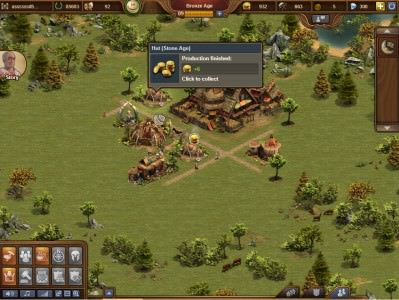