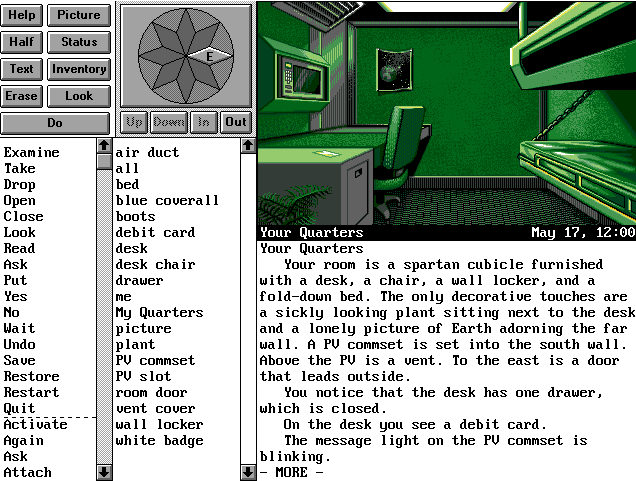 Frederik Pohl's Gateway - the first part of the dilogy according to the book of the same name by Frederick Paul.

The discovery of alien life for people took place in an unusual way - they discovered traces of an extinct civilization, a base inside an asteroid full of alien technologies ... including the Gates that could transfer their constituents anywhere. And quite quickly, the asteroid turned into a point of concentration of people who want either to visit other worlds themselves or to bargain trophies from there brought.

We have to be in the shoes of one of the Miners, to travel around a lot of alien planets, playing with unfamiliar artifacts and technologies, and try to find out where the creators of this whole feast of engineering disappeared ...

From a technological point of view, Gateway is another glorious representative of the latest generation of text quests from Legend. Already there are cartoon screensavers as in Eric the Unready, support for VGA and so on, but text input has not yet died out. Already there are inserts with buttons (here various technical units play their role), which also cannot fail.

In general, a high-quality representative of the genre is gradually losing ground in the performance of the most successful long-liver of its developers. It is worth a look, if you are not afraid of text quests, it’s very worth it.