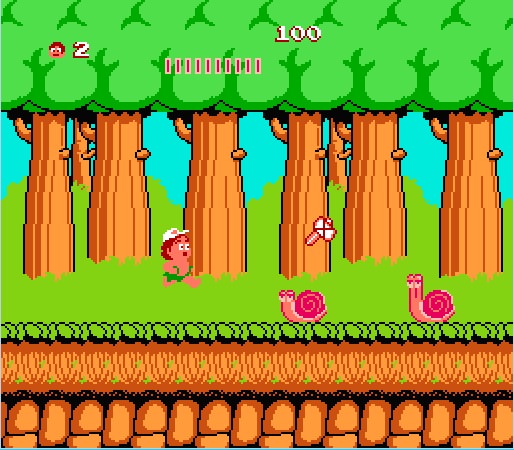 This game was made on September 12th, 1986. In the game Hudson's Adventure Island you have to control a character named Master Tokahashi. This is such a plump teenager in a baseball cap and a palm-leaf loincloth who needs to save her girlfriend.

The immediate task facing the player is to reach the end of the level as a whole, until the time runs out. At the end of the level, at the end of the so-called world you need to defeat the boss. For a collision with an enemy or his shell, as well as for jumping into the fire or when an icicle falls on a player’s head, life is taken away. For a collision with a stone on the ground, from four to five risks of the time ruler are taken away, and also the weapon is taken away. Time is replenished by collecting bonuses.

At the level are distributed various fruits and berries. Each of these bonuses adds a certain amount of time and points. A cane of a banana gives 100 points, a carrot - 300, an apple - 500. Sometimes there are so-called amphoras at the level, which, when the points are scored after passing a level, double their number. For every 50,000 points a player gets an extra life.

In this game, it’s still inconvenient control. You get used to this game for a very long time. And in general, if you want to go through Hudson's Adventure Island, you really have to try very hard ...