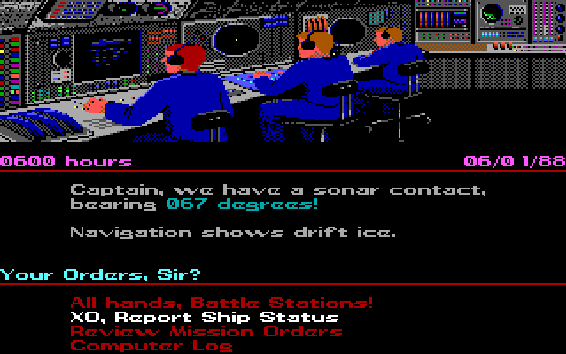 To begin with, I have say that "Red Storm Rising" was originally a book by the very popular writer in the United States, Tom Clancy, the creator of the genre of techno-thrillers, that is, works where all the action revolves around stolen nuclear warheads, or tricky listening devices, or something else Any high-tech crap. “The Red Storm Rises” (it was with this awkward title that this book was published with us) tells of a funny story that happened in the Soviet Union - vicious Azerbaijani Islamists blow up the Nizhnevartovsk oil refinery together with a nearby oil well to the shaitan mother. As a result, the Soviet Union finds itself without about half of the fuel produced (don’t laugh, I didn’t think of it!) And, in order to prevent an economic crisis, the party takes the only right decision - the capture of the Persian Gulf! The evil russians are preparing for war with might and main, the valiant Americans, having learned about this, are also not asleep, in short, about the second third of the book begins the Third World War.

This is the plot of the book. In the game, made based on this work, you are assigned the role of not the Secretary General of the CPSU and not the President of the United States, but only a modest captain of the submarine. Another thing is that this is not some diesel coffin that only scares fish well, but the newest Seawolf with nuclear Tomahawks on board ... And there is war around (that is, a dynamic campaign - everyone is at war, the world map is constantly changing , someone is advancing, someone is retreating - everything is for real). So whistle everyone up, we set sail!

Naturally, they won’t let you ride just like that - you still have to carry out the tasks of the headquarters. Tasks, however, are generated new each time, so you won’t be bored. Therefore, remember: if you are told that a pair of some miserable boats that you need to sink is found in a square next to yours, do not flatter yourself: these may be two aircraft carriers waiting for reinforcements. Although it may turn out to be two barges with a strategically important cargo of footcloths, so how lucky it is ...

Of course, some decency framework was nevertheless observed: patrols, convoys and the transfer of forces from point A to point B correspond to the situation at the front, so looking at the map, you can more or less clearly imagine where, who and how many ships (as well as helicopters, coastal artillery batteries, and so on) holds. Although all this political information does not block the main thing - the management of the submarine! And it was modeled quite reliably, although graphically - quite simply, but, in the end, this is the 88th year! The main thing here is not the number of pixels per inch, but that the devices work, and the torpedo tubes are charged. Believe me, there won’t be any problems with this - the atmosphere is very pleasant, it’s interesting to play, even despite the moronic plot.

Yes, and again: if all of the above did not convince you, I will add one - the designer of this game was someone Sid Meyer, the author of such little-known toys as Civilization and F-19 Stealth Fighter.