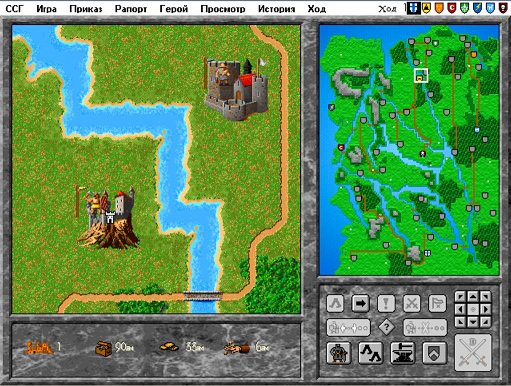 Note: Warlords 2 and Warlords 2 Deluxe are the same. But game Warlords 2 Deluxe has presence of a level editor and slightly polished graphics.
Load, load again and load game again ... Well, finally! After a rather long reading of the records, our army utterly defeated the enemy’s powerful garrison, headed by its most powerful hero, and as trophies we got a rich city and a bag of junk (sorry, with magical artifacts) of the above-mentioned hero. All this is a common thing for Warlords II (and for any game in this series), and to the questions “Not tired?” I usually answer “Tired to death”, but I still play this strategy. It has a lot of interesting and unique moments in its own way, for which it is worth enduring an annoying monotonous work. Yes, and in which game there is no routine? It is everywhere, somewhere more, somewhere - less.

I specifically started the story of Warlords II with just one of its most important features - the unmanaged battle. It is precisely this moment that repels many. But the uncontrollability here is only apparent - in essence, it is simply a form of calculating the results of battles and nothing more. In a game of any genre, the authors are faced with an important and complex question: how to most accurately and correctly reflect the influence of a person on the game world? In turn-based strategies, this comes down to the problem of hostilities between troops of different parties. Here, developers make different decisions, and each of them has its own pros and cons. In some games (Imperialism, M. A. X.) each military unit deals ONLY exactly specified damage from a certain distance - there is no place for randomness, but there is too much predictability and, one can say, "chess". In others (Heroes of Might and Magic, Panzer General), along with the basic data of all troops, there is an element of chance: morality, luck, and so on. Thirdly, they include all the games of the Warlords series - there is no direct control over each part in a tactical battle, which, of course, prevents the player from showing ALL his skills in a battle, but allows him to fully concentrate on preparing for this battle. All these (like many other) decisions of the authors of the games are quite viable, and there is no point in arguing which one is better. Here it is already necessary to choose each player independently, as they say - “There are no comrades to the taste and color”

Compared with the first part, in Warlords II almost everything has been improved (and successfully). Perhaps only the graphics have changed the least, although it has improved somewhat. As before, eight commanders led by people or artificial intelligence wage war on a strategic map. But there are several such cards now, each with its own original features influencing the course of the game. The interface has become much "friendlier", there are many new information features, various data (for example, there is a kind of chronicle of each scenario in which all events are recorded: who took the city in what course or found the subject). Now it is possible not only to look at all the parameters of the troops and their unique abilities in one table, but also to determine the combat order in which they will receive the battle. A rather important innovation has appeared - diplomacy, although it is rather primitive, and computer opponents, as a rule, tend to fight precisely against a person. Before starting any scenario, you can enable various options that did not exist before: this is the “fog of war”, the ability to see the composition of the enemy’s armies, and so on; All this changes the complexity of the game even more than setting the level of each of the computer opponents.

Many new and in terms of urban development. When taking a city, you can choose whether to occupy it, “plunder” (that is, sell the opportunity to train a certain type of troops there) or destroy it. But be careful - when you don’t have ANY city, you will be defeated immediately, no matter how powerful your armies remain. You can also buy the opportunity to train various troops in a particular city.

A lot of innovations and improvements made for the characters. They have become more consistent with their name, because each of them - with proper development - can alone defeat entire armies; heroes should be in every way, as they say, "groom and cherish." The system for gaining experience by heroes was streamlined and improved; honorary titles for them appeared (champion, amazon, paladin, and others). True, there are no unique abilities for heroes of different nations - this will appear only in the third part of the Warlords. The appearance of quests was very interesting and exciting: now the hero can get a task when visiting the corresponding building on the map (for example, take the necessary city, destroy so many soldiers of a certain player), for the fulfillment of which a big reward will be promised; the process of performing such a task is very exciting and gives pleasure no less than the reward itself.