Wizardry 6: Bane of the Cosmic Forge 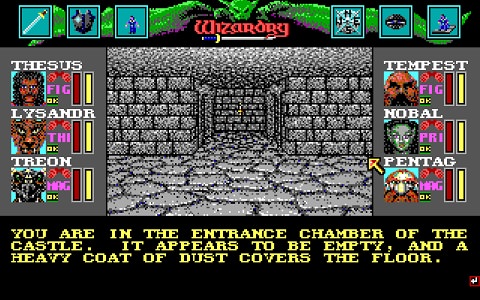 Wizardry 6: Bane of the Cosmic Forge is a continuation of the Wizardry series of games. The kingdom of Llilgamine long ago ordered a long life. The once wise and fair royal dynasty was replaced by another ... less wise and fair. The new king, having formed an alliance with the evil powerful sorcerer, found a kind of artifact that allows you to rewrite reality. And centuries of brutal tyranny, slavery, wars and reviving nightmares began. Until everything mysteriously ended. For several hundred years, no one had heard of the King, nor of his Queen, nor of the Sorcerer. The castle has long been abandoned. But, they say, at night there is still no, no and the light flickers, and wild, terrible sounds announce the surroundings.

A new trilogy begins without any long histories: we find six adventurers, driven solely by their own ambitions and an indefatigable thirst for adventure, at the entrance to an abandoned castle in which the tyrant and satrap once ruled the country with their second - not the best - half. The castle, which has a very bad reputation and is popular with bandits, pirates and other dark personalities, is also inhabited by very aggressive flora and fauna. But what are dangers when you have distinct perspectives of power, wealth and glory?

If in the last part the oldest role-playing series escaped with only small changes, then in the new series he was waiting for real revolutionary changes that touched all aspects of the game. In addition to external changes, such as: changing the graphic "engine" and adding new races and classes - the game has pretty much changed internally. Role and magic systems have also undergone changes. Agility has been replaced by two attributes, Dexterity and Speed, which had both common and differentiated features. Personality came to replace the alimony, although it reflects, not so much the character’s ability to change a profession, as the outside of the character’s relationship with the NPC. The Luck parameter has been replaced by Karma, which is determined in a truly “karmic” way - a random roll of a die. Having modestly begun in the fifth part with his only skill, Bradley continued the expansion of the sixth part with a truly imperial swing: in Bane of Cosmic Forge your characters will have to deal with more than twenty skills, divided into three categories: weapons, body and academic. Even more "destructive" changes have occurred in the magical system. And here the matter is not only that the game began to operate with more understandable spell names instead of the unintelligible “Halito” - “Mahalito”, but also due to the appearance of new subspecies of casters - psionics and alchemists, magic was divided into six schools ( elements) and allocated for each of its "mana pool". That is, having exhausted the reserves of magical energy in one of the schools, you could no longer use the spells of this element, even if the blue "thermometer" of the total mana was still vigorously held at an uncritical mark.