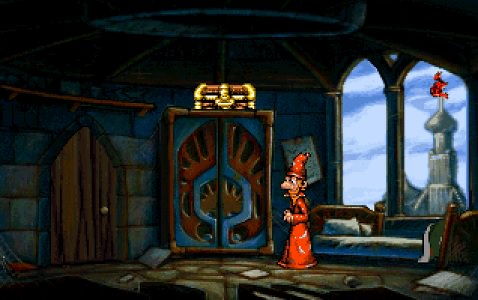 Discworld is based on a series of science fiction stories by Terry Pratchett. You play as a dropout wizard Rinswind who is tasked with defeating the dragon terrorizing the population of Ankh-Morpork, the largest city of Diskvord, a flat world that rests on the back of the giant turtle A'Tuin.

By the time the game was released, the point'n'click interface had become the standard for quests, so in this game you can enjoy all the delights of intuitive control. All your inventory is stored in a magical box that runs after you, a seed with countless legs.

The game, however, like the books of Terry Pratchett, is filled to the top with humor and seasoned with a healthy bit of irony and absurdity. Be sure that right up to the very end of the game you, with rare exceptions, will not be able to perform any logical action - in order to get through Discworld, you need to get used to this world, learn to think like the dropout wizard who will have to perform the greatest feat in his life. , but who still does not know why he needs it.