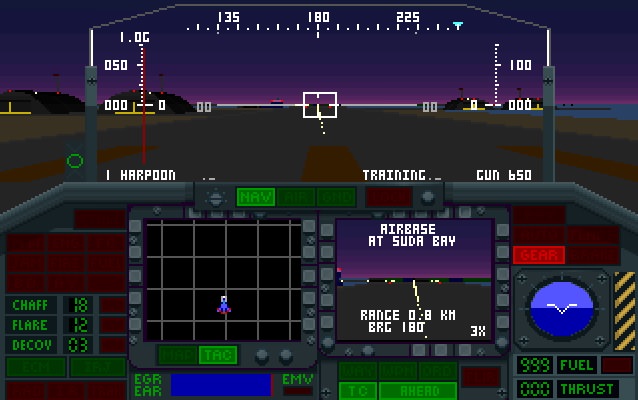 Fighter simulators ... How similar one to the other ... Well, at least in what they differed.

So I thought, until I stumbled again on the childhood game F-117A Nighthawk Stealth Fighter 2.0. Comparing it with other simulators, I often said something like, “Wow, cool!”.

So, what is the game itself? Let's start in order.

In the mid-1980s, US aircraft craftsmen implemented a project such as a ghost plane. Stealth For those times it was something from the world of fiction. But the active declassification of "guest from the future" waited only in the early 1990s: participation in several conflicts, new developments and even filming in the film "Philadelphia Experiment 2".

Of course, someone wanted to fly at the helm of an invisible fighter. And then the game makers from MicroProse got down to business ...

The menu in the game came out somewhat unusual for 1991 - in the form of a headquarters corridor with doors somewhere. For one player "arms" the plane, for another accepts the task, for the third chooses a campaign: in the Persian Gulf, in Cuba or in Vietnam ...

But now we are done with the formalities, sit in the cabin, roll out of the hangar ...

Up to this point it would be nice to study the difficult (almost the entire keyboard) control - otherwise you will not even be able to take off. For example, I had to flick long toggle switches, keyboard and brains in order to take off. But here we are moving forward, slowly rising and - oh - we take off!

Here we note that some control chips are not found in other fighter simulators. For example, ours can hang in the air and become thoughtful (the latter is optional). There is also an autopilot: we indicate a point on the map and in flight we put the plane on speed, after which it flies to a given point. Also this aircraft, since it is invisible, is not available for radar.

Graphically, this simulator is not different from other simulators of those years. The same rustic 3D-picture overboard and the same two-dimensional monitors. Well, unless there are more monitors than scales, but that is another story.

So what can I say in the end? I will say this: if you own a virtual fighter steering wheel, you have already flown on ordinary planes and are thirsting for new sensations - then the game is for you.