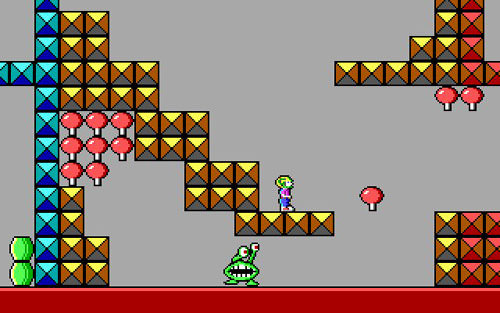 Here you can play Commander Keen 1: Marooned on Mars online. It all started back in 1990, when a team consisting of programmers John Carmack, John Romero, designer Tom Hall and artist Adrian Carmack known at that time as Ideas From the Deep released the Commander: Invasion of the Vorticons line of games for the operating system MS Dos. It consisted of 3 episodes:

The game was distributed on conditionally free model. Then in 1991 Commander Keen: Keen Dreams. Also known as episode 3.5. Already developed by Id Software, founded by the former chasans of Ideas From the Deep after the success of the previous game.

Next, December 15, 1991 saw the light of Commander Keen: Goodbye Galaxy. Like its first predecessor, it consisted of several episodes and was distributed conditionally free of charge. Commander Keen: Aliens ate my baby Sitter is coming next month, which was originally planned as an episode for Goodbye Galaxy, but it became an independent game developed on a modified engine.

After all, Id Software developed a third set of episodes for the next December called Commander Keen: the Universe in Stone, but stopped working on this project after the overwhelming success of Wolfenstain 3D, released on May 5th, 1992. After that, they decided to focus their work on 3D shooters. Project Commander Keen was abandoned.

In the story, we have to play for Billie Blaise, an eight-year-old boy who gathered a spaceship in his backyard and decided to go exploring the Universe, wearing a baseball helmet, prudently taking with him a blaster and a Pogo stick.

This is all an ordinary two-dimensional platformer, with a set of various levels, between which you have to travel around the open world to get from one to another. The task is to get from the beginning of the level to its end, bypassing a series of various obstacles. These are all kinds of thorns, pits, spilled radioactive waste or plasma, electrical discharges and, of course, enemies.

In Commander Keen you can meet anyone: robots, galloping balls, aliens with a cheerful grin, even potatoes. Neutralize them with the help of a blaster that has a certain ammo. If there is a possibility, you can save money on shots and bypass rags without harming them. But remember, it is necessary to do it carefully, as soon as you have the first contact, you will immediately lose your life and go to the beginning of the level.

The blessing in the game has a save system. In the first parts of the game, it allowed to remain only in the open world in the breaks between the levels, when in subsequent parts it could be done in any place convenient to us. For example, before any difficult area where you can lose a life.

I would like to note that over time, not only the saves system has evolved, but also the graphics and sound. Starting with Commander Keen 3.5: Keen Dreams, the creators used pseudo 3D technology. This gave the platformers a familiar look and brought the image to a new level.

In the game, in addition to the enemies, there are some pleasant moments. These are candies and chocolates, Pepsi and lemonade cans, a dream for the eight year old Billy. For each of these we earn some amount of points. And when they reach a certain number, we will be pleased with an extra life.

In conclusion, I would like to say that Commander Keen at that time was one of the best representatives of its genre. Notable for nice computer graphics and interesting musical design.