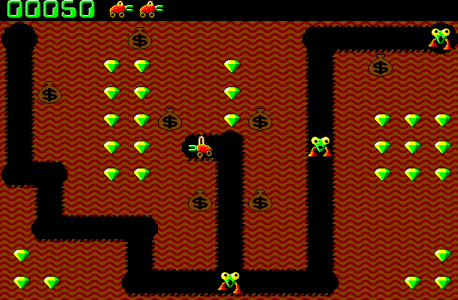 The original Digger was created by Windmill Software in 1983 and released on copy-protected 5.25 "floppy disks for IBM PC / XT. It was designed for CGA video and, of course, no longer works on modern computers.

On this page you can download a more modern incarnation of Digger.

The goal of this great game is to collect all the emeralds, digging your way through the rock and dodging monsters. The game has bonuses that you need to first throw off from a great height, breaking them, and then take them.

Monsters are only two types: Nobbin and Hobbin. The second is different from the first in that, like the player, is able to dig. The player, among other things, is able to shoot, but after the shot this opportunity is blocked for a certain period. Opponents can be killed by a flying down bonus, but it can also kill a player, so be careful. You can play alone or together.

There are only 10 levels in the game, but it is difficult to pass them, especially since with each level the speed of the monsters increases.

The game is a great time killer, because you won't be bored here.