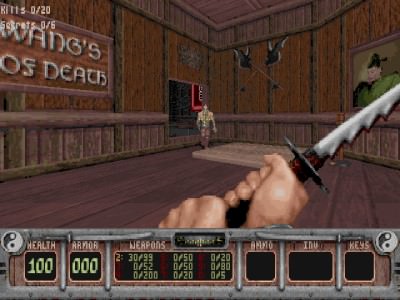 Shadow Warrior is a very cool Dos game. It is well known that in 1996, among the game products, the publication of the Duke Nukem 3D game released on the Build graphic engine made a big splash, and many would have thought: “Well, it’ll probably be more humorous than a shooter ...”. However, this was an erroneous conclusion. The development of Shadow Warrior was started back in 1994, long before the publication of Duke. Even then, the developers set the bar: for a humorous 3D shooter about a master ninja to completely “interrupt” the success of Duke Nukem. And I must say, they brilliantly succeeded.

Build began its victorious procession back in 1995. It was still the same 2.5D architecture, but inclined planes were added compared to the Doom levels, and through the use of portal technology, multi-storey construction was possible. Specifically, in the Shadow Warrior voluminous voxel sprites appeared (in the game it was mainly a display of various selected topics). In the first years of acquaintance with the game, I had no idea what 2.5D was, but only then came the realization: how masterful this game is, made on an engine, which is based on a virtually flat architecture.

Shadow Warrior has incorporated a very large number of so-called humorous "references" to films and generally a lot of sparkling banter over widely-rooted stereotypes about Asians and not only. The game takes place entirely in Japan. Here, Japanese culture and life is presented in the form of a very wide cut: from the countryside and ancient castles to the modern quarters of Tokyo, from industrial areas to offices. Features of the culture of this Asian country - buildings, interiors, patterns, paintings, etc. - are presented in great detail and color. I think that without the participation of Japanese consultants, the creation of the game was definitely not complete.

The hero of the game is Luo Wang, a peppy and strong grandfather, judging by the name, obviously of Chinese origin. Luo is the best specialist in various complex, subtle, special and delicate tasks, which is surely hired by any self-respecting corporation in Japan. The corporation, the former employer of Lo Wang, is called Zilla Enterprises. Her master, Mr. Zilla, conceived terrible things about forcibly changing the country's governance scheme with the help of some dark forces. Luo Wang managed to unravel the master’s cunning plans, then, as is now customary to say, a personal conflict occurred, and now Zilla doesn’t leave old Luo alone. In addition, Zilla in the first levels of the game dared to kill the old teacher, Luo Wang - master Lee, and such things are no longer forgiven. The plot is quite simple, but what came of it? ...

The game exaggerated a lot of points. If there are trickles of blood - then river flows of 7-10 meters, if chopped with katana - then immediately into several pieces with one stroke, if the use of napalm - then a solid fire wall and so on. It is these hyperbolas that go beyond common sense and serve as the main basis for the humor of this shooter. In Shadow Warrior there is even the possibility, hiding around the corner of the building, to fire from a rocket launcher equipped with one nuclear warhead. At the same time, the main damaging factors of a nuclear explosion were reproduced quite authentically: light flare, shaking from the passage of a shock wave and short-term radioactive contamination of the area in the “epicenter”. Of course, that absolutely all opponents of Lo Wang, who fell into this area on the map during the explosion, will no longer be able to take part in the further game process. Of the other games of 1997, MDK can also be noted with a similar chip, where such a "new" is even specifically positioned as an explosion of the world's smallest atomic bomb.