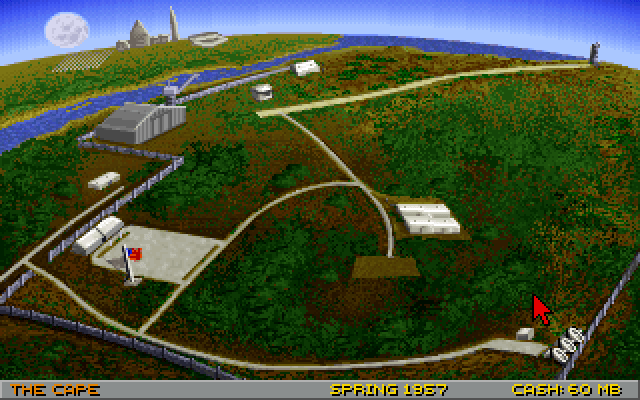 Buzz Aldrin's Race Into Space is a brutal cold war space program chief executive simulator. Based on the board game!

Outside in 1957. The space programs of the USA and the USSR have already been launched, and the heads of the respective institutions wrinkled their minds with might and main - how could they outrun the damned overseas competitors?

The game allows us to plunge into all the wilds of designing, organizing and executing space activities, recreating the historical sequence ... or maybe breaking it. Perhaps Gagarin will die during training sessions and someone else will become Cosmonaut Number One? Maybe the Americans will still be the first to launch their unmanned spacecraft into orbit? Or will Tereshkova get a chance to walk on the moon?

The game also contains the ability to go beyond historical events - provided that your business is going smoothly and the development is growing quickly, maybe you can even manage to get the hang of it and land people on Mars! Or launch an artificial satellite of Jupiter!

All this Manilovism is supported by a rather brutal reality. A chain is only as strong as its weakest link, and there are a lot of links in rocket activity - a launch vehicle, cargo, fuel, crew (when it comes to this), and even further ... And all this needs money - in order to to provide salaries to builders, scientists and in general, to pay for consumables and repair of malfunctions, to pay bribes and penalties ...

The gameplay itself is step-by-step, with a step of six months in real time. Every six months we revise our plans for the next six months - sometimes we are given intelligence data from the corresponding country, sometimes from news releases that separate moves, we learn, for example, that just now several major scientists successfully fled from the USSR to the decaying West, and therefore The USSR on this course of development will worsen, while the Americans, on the contrary, will intensify. And so on.

The basic scheme is extremely simple - to launch rockets, you need their elements. Engine, hull, cargo, booster stages. Each element is limited by three or four parameters - reliability (increased through scientific developments), cost, weight, carrying capacity (or another measure of functional utility - for example, the safety of the crew in the landing capsule). Put it all together at the launch pad - we start the game with one, but we can adjust more if necessary - and away we go. We are transferred to the MCC, where a carefully selected newsreel cut will show us the result of the launch - for example, the takeoff was successful, the first stage worked fine, but the second did not unfasten in time, the altitude was not gained, and the rocket crashed into the sea, BUT the crew managed to be saved. Or failed, as luck would have it.

All this has to be reckoned with, and gradually the Kremlin wall (or the Arlington cemetery) will be overgrown with tablets with the names of the heroes who fell in the name of their homeland.

American astronaut Buzz Aldrin acted here as a consultant - well, a promoter, having worked on the game as a "face" in the most literal sense - his photo adorned the cover of the floppy version of the game.

The interface for each side is different - although the basic elements are similar - plus different styles of play. Still, the command-administrative economy is not the same as capitalism, and it is useless to compare shuttles with our descent vehicles. Fans of twisting the settings will be happy to know that it is possible to play both in conditional mode and in historically correct mode (where some of the events will be non-random, and some launches will be mandatory). There is also a Hot Seat mode, with all the ensuing delights of squeaking your brain against a living person.

You can talk about game mechanics for hours - but in general, it is enough to say that the in-game help (accessible by right mouse button) answers the questions that arise relatively fully.

Summary? This is a very strong, but uncontrollably difficult management simulator. Yes, space and all that, but in fact - managerial. Maneuvering between success-dependent state budget subsidies and increasing costs as technological progress grows, between more frequent launches and more reliable missiles - all this adds interest to the game due to elements of unpredictability, and hence complexity. Clearly the game is not for the impatient.

If you are interested in advanced management tasks or the topic of space exploration itself, you will be welcome here.