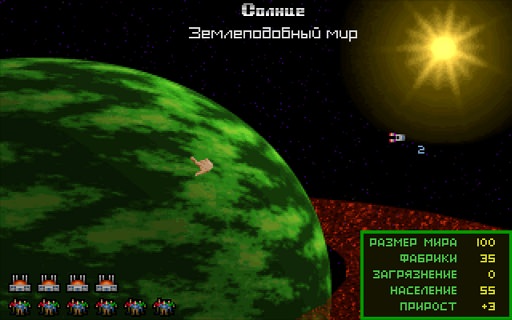 Here you can play wonderful space strategy Master of Orion. Lets speak little about this game. In the role of the permanent ruler, you must lead your race to dominance in the galaxy. The strongest survives.

To begin, you have to choose one of ten races, each of which has its own advantages and, accordingly, disadvantages.

You start with just one planet. Is it a lot or a little? In Civilization of this goal (the possession of the entire planet), you tried to achieve the whole game. But in the world of Master of Orion, this is only the beginning of a long journey. Around you are many unknown stars of various colors that indicate the age of a star. The older the star, the less resources on it, but the better the climate on it. In order to find out if a star (equivalent to the planet) is suitable for colonists, you should send any ship from your fleet. If it is suitable, then feel free to send a ship with colonists and call your first colony a sonorous name. On each planet there are several tens of millions of colonists.

With the help of five "rubber" graphs, which will later be applied also in Master of Magic, you regulate the allocation of resources to various industries. As far as increasing one graph, reduce the rest. Graphics are responsible for shipbuilding, planetary defense, industrial system, ecology and scientific research. It's nice that all values ​​are relative, so that with population growth, it is not necessary to change the values ​​of the graphs. For example, at first, in order to increase population growth, it is recommended to take care of ecology. Gradually, the population of the planet reaches its maximum, and then the computer automatically redistributes some of the resources to build factories, thus freeing up many unnecessary actions and arranging the planet for maximum performance.

Planets also differ in environmental conditions, which are thirteen species, starting with quite terrestrial and ending with radioactive and toxic deserts. Initially, you will be able to settle only on planets with conditions close to those on Earth, but thanks to scientific developments, any planet can be made habitable. The only exceptions are stone-like Silikoids, which are able to live in any climate. Also, the planet has a level of saturation with minerals, which greatly helps the industry, and the possibility of finding foreign artifacts on it, giving new ideas for research.

All planets are generated randomly, but one planet never changes - Orion. According to the plot, there was once the center of the Galactic Empire. But the Empire fell. So now it’s just a huge, fertile planet rich in minerals and artifacts. It has only one drawback. She has her own "Guardian" - a huge spacecraft equipped with an extremely powerful weapon. Only by defeating him, you will be able to master the planet.

An important and very interesting part of the game is the diplomatic system. There are several ways to interact with computer rivals. You can exchange technologies and establish trade routes between different races, you can sign a non-aggression pact or even make an alliance. But it is worth remembering that computer opponents do not forget anything. Even if you are in a state of peace with your neighbors, but accumulate forces at their borders, they will not miss the chance to point this out to you and will be asked to withdraw troops in order to avoid various "misunderstandings". With a certain superiority, you can both donate technology, strengthen your allies and relations with them, and threaten your rivals. For example, it is possible to request a race to break an alliance with its ally and instead offer it some useful technological invention. All these diplomatic tricks are actively used by the computer, which makes it a difficult opponent. Attitude towards you of other races is shown using an intuitive color graphics. So you will not offer an alliance to your natural enemy.

Espionage is also part of the diplomatic system. With the help of all the same graphs, you assign the level of the desired intelligence and counterintelligence. In the case of your spies, you can assign them both to the simple theft of valuable technologies, and to sabotage or even instigation of insurrection on a planetary scale ... unenviable position.

The combat system is divided into ground and space. To capture the planet should send a space fleet. If the ships of her race are in orbit of the planet, or she has orbital protection, the battle will inevitably start.

The whole field is divided into squares, and the battle takes place step by step. There is some freedom for tactical thought, but the key to success is technological superiority. The ships have four standard sizes and many external forms that do not affect the technical characteristics. You have to install engines, aiming systems onboard guns, guns, various protective fields and many more exotic devices. So you have the right to create a unique fleet, where no ship is like another, but they are all equally deadly.

When the orbit of the planet is captured, you are offered a choice of two options. You can either burn out the planet with orbital bombardments, or send an assault force there, hoping to capture some of the population and technology. It is impossible to control ground combat, its outcome is decided by summing up the features of the races, their weapons and the number of soldiers on each side, and you are only confronted with the fact of victory or defeat.

Science in the Master of Orion is assigned not less, and perhaps even a more important role than diplomacy. As in the management of the planet, you can distribute your scientific resources in six areas: computers, construction, force fields, planetology, propulsion systems and weapons. Without technological superiority to win almost impossible. This is particularly pronounced in space battles. One "high-tech" spacecraft is able to destroy hundreds of "primitive". But how you get these technologies - research, espionage, exchange or seizure - is entirely a matter of playing style.

The interface is very convenient and intuitive, and indeed it shows the care of the player. For example, when developing a new improvement in the planetary atmosphere, you will automatically be asked to apply it to all your planets. The same menu is not so much, and they try to be as informative as possible.

You can complete the game in many ways, but there are only two animated endings. You can destroy all your rivals and thus become the ruler of the entire galaxy. Or, if more than two races participate in the game, from time to time elections will be held for the post of the Head of the Council, and you can win them. The leader of each race has a number of votes in proportion to the population of his race and has the right to give them to one of the two main candidates. When one of the candidates gains more than two thirds of all votes, he is automatically elected Head of the Council. If the choice is not for you, then there is always the opportunity to express disagreement and declare a galactic war ...

This is an amazing game, the best representative of the genre, surpassed only by its "descendant" - Master of Orion 2. My stars are always with me...